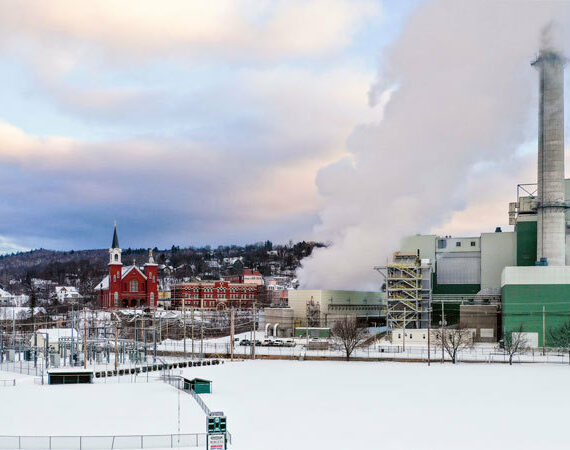 Since the mid-1800s, the economy of Berlin, New Hampshire, known as “The City that Trees Built,” revolved around the paper mill located in the heart of the city. Therefore, it was a devastating blow when the Fraser Paper pulp mill closed in 2006, as the community of Berlin and the rest of the region were dependent on the mill as a critical employer. “In 2008, an opportunity arose to bring new life to the shuttered mill by converting its existing black liquor boiler into a state-of-the-art, 75-MW biomass power generating facility, and Burgess BioPower was born,” says Sarah Boone, vice president of public affairs for Burgess BioPower. “Today, Burgess BioPower delivers 500,000 megawatt hours of local, clean and reliable power to New Hampshire annually, along with acting as an economic driver in the state’s North Country and beyond.”

The site that Burgess sits on is a 65-acre parcel of land, half of which housed the prior pulp mill when it was in operation. Over the past decade, the facility has established itself as one of the most technologically advanced biomass plants in the country, representing a $275 million investment that received enthusiastic support from the state of New Hampshire, local governments and businesses when it began development. The project completed construction in 2013, and has been in commercial operation since 2014. “Annually, Burgess handles more than 800,000 tons of wood chips delivered from wood suppliers in 150-plus New Hampshire communities,” Boone says. “Unlike other renewable resources, Burgess is a baseload supplier, operating with over 90% availability and capacity.”

Burgess BioPower came to fruition because of the collaborative efforts of project developers, state and local officials, and Eversource (formerly Public Service of New Hampshire), all of whom recognized the state and the region needed local, renewable power sources. “New Hampshire is heavily dependent on natural gas, leaving the state vulnerable to extreme market conditions, constrained supply, and delivery challenges,” Boone says. “Creating renewable generation assets that utilize local resources and offer fuel diversity was a key priority for stakeholders.”

Not surprisingly, Burgess BioPower received widespread, enthusiastic support from the community as the plant worked through the proposal and approval process. Beyond its renewable power-generation benefits, local, state and regional stakeholders saw that Burgess BioPower would not only serve a critical need for renewable, price-stable baseload power, but also that it would play a crucial role in supporting the forest products industry, generating and sustaining jobs throughout the region.

Today, Burgess BioPower is the largest single buyer of biomass in the state. This provides critical financial support to regional foresters and sawmills, which is especially crucial in the wake of additional paper mill and power plant closures.

The Plant in Action
Burgess BioPower is the largest renewable energy generator in New England and the fourth largest power producer in New Hampshire. Beyond power production, the plant provides immense economic benefits for northern New Hampshire, supporting more than 240 jobs statewide and generating nearly $70 million in annual economic activity, according to a 2020 economic impact study.

“Burgess has generated more than $550 million in statewide economic activity in its operating history to date, and is projected to generate $1.38 billion over 20 years,” Boone says. “Burgess provides diversity and security because it runs on locally sourced fuel and is not subject to the high variability of fossil fuel markets.”

Burgess operates under a 20-year power purchase agreement with Eversource, which provides much-needed, long-term price stability in an energy market that has seen dramatic fluctuations in recent years.  “Since the start of commercial operation, Burgess has explored a number of colocation possibilities, including a greenhouse, data center and cryptocurrency mining operation, among others,” Boone says. Several years ago, there were attempts to utilize the waste heat from the plant, such as efforts that would see a four-acre hydroponic greenhouse that would produce more than a million pounds a year of baby leafy greens—but that project never materialized. “The greenhouse project began in late 2018 and advanced to the engineering stage, but ultimately did not come to fruition due to a combination of factors, including COVID-19, market limitations for the greenhouse company’s products, and legacy site issues,” Boone says.

However, Burgess continues to facilitate colocation opportunities and would welcome additional development on-site, according to Boone, and it’s believed that similar projects like this will be operational in the years to come. While none have come to fruition yet, a new project with the city is unfolding.

Big Project, Big Benefits
Last summer, the city of Berlin was awarded a $19 million grant through the Rebuilding American Infrastructure with Sustainability and Equity program through the U.S. Department of Transportation. The city will use the funding to construct and replace infrastructure in downtown Berlin to allow the city to use waste hot water from Burgess BioPower to melt snow and ice on city roads and sidewalks, similar to what the city of Holland, Michigan, did years ago and has since expanded.

Currently, Berlin’s Public Works Department is responsible for managing over 60 miles of paved streets, as well as sidewalks and several municipal parking lots. In the winter, this includes plowing roads and snow removal, and when spring arrives, sand buildup from snow management must be removed from the downtown streets and sidewalks. Inaccessibility during the winter months leads to an estimated $900,000 in foregone revenue, thus making it very challenging to successfully keep a business open in the downtown area.

Pamela Laflamme, director of strategic initiatives and assistant city manager for the city of Berlin, notes the grant is part of a larger downtown reconstruction project, which will include reconstruction of streets, sidewalks, public parking, replacement of two box bridges, water and sewer infrastructure upgrades and the snowmelt infrastructure component. “This allows us both the opportunity to upgrade our aging downtown infrastructure and add in an innovative component that will save the city money in maintenance, provide economic opportunity, and allow our residents a place to walk during the winter without dealing with the issues of snow and ice,” she says.

Installing the heating system will allow the city to replace around two miles of roads in the downtown area as well as a bridge in need of repair. Additionally, the city believes the partnership with the plant will be a good demonstration to attract other businesses that could use the remaining waste heat on the plant’s 60-acre property.

The way it will work, Boone explains, is flowing through a network of pipes, the waste hot water will be transported across the Androscoggin River beneath city streets, sidewalks and parking lots throughout the winter. “The expectation is that the project would reduce costs for the city, in terms of snow removal and treatment, while also serving as an economic driver for the downtown, drawing and inspiring businesses to relocate or expand in the downtown,” Boone says.

According to the grant application, the snow-melting system will use condenser water from Burgess BioPower, which will be circulated to the downtown area and then back to the plant. This will effectively cool the water, as is needed by the power plant, while heating the downtown surfaces. Water will be pumped across the river through 24-inch, high-density polyethylene piping mains running on a reconstructed bridge. The piping will split into two mains, each with a supply and return line, traveling underneath two main streets to serve multiple snow-melting zones. These zones will consist of a wire mesh layer over crushed gravel, with the mesh affixed to one-inch-diameter loop tubing made of a crosslinked polyethylene material. The tubing will be installed in a compactable layer of sand, with pavers overtop.

In total, the city’s goal is to heat just over 380,000 square feet, which would only use around 8% of Burgess’s waste heat output.

As currently conceived, the city will fund, construct and own all project equipment, and Burgess will operate and maintain the pump house and equipment located adjacent to the Burgess plant. According to the project application, Burgess will provide its engineering resources to support detailed project design, specification and construction. This arrangement leverages the skill sets and primary focus of both entities.

The installation of the proposed snow-melt system and the associated useful thermal energy generation would qualify for thermal renewable energy certificates (T-RECs) under the state’s renewable portfolio standard, which requires load-serving entities to acquire renewable energy certificates from qualified generators equal to a set percentage of the load they serve. These credits are calculated based on megawatt-hours of useful thermal energy produced. T-RECs associated with the proposed project would be a result of both the snow-melt system itself and use of the building heating system. The city estimates the combined value of these credits is anticipated to be $550,000.00 annually.

On top of T-REC generation, preventing major revenue loss to inaccessible downtown businesses, and reducing expenses associated with snow and ice removal, there are even further benefits. These include reduction of property damage on vehicles and buildings due to elimination of salt and potholes, and reduced emissions associated with winter maintenance activities, including sand application and cleanup, all together totaling a discounted value of benefits around $18 million over the project term. Boone notes that Burgess is also working with the city of Berlin to assess the feasibility of expanding the system to include district heating, which could significantly reduce heating costs and fuel oil use for buildings connected to the system.

Saving the Day
When the pulp mill closed in 2006, Berlin struggled to hang on. The mill had been the primary employer in the community for decades and the impact of its closing was immeasurable. Burgess BioPower was exactly what the community needed, serving as a critical economic driver, helping the city get back to a point where it could thrive.  “Burgess BioPower’s impact on Berlin and northern New Hampshire was immediate,” Boone says. “The project created more than 500 construction jobs during the roughly 26-month construction schedule, and it has created and sustained hundreds of jobs within the region’s forestry industry.”

Further, she notes, Burgess is Berlin’s first real economic development success story in more than 40 years. After ranking No. 10 from 1991-2011, Coös County, in which Berlin is located, jumped to the fourth-highest annual growth rate among New Hampshire counties between 2014 and 2018, which coincided with Burgess’ start of operations. In terms of city services and budget, Burgess BioPower contributes 12% of the city of Berlin’s tax revenue; 25% of annual water fees, and 10% of annual sewer fees.

In the wake of economic turmoil, the successful development, construction and operation of Burges changed the outlook for Berlin and the surrounding community, Boone reiterates. “Burgess BioPower brought diversity and industry viability to an area that was once solely dependent on the pulp and paper industry,” she adds. 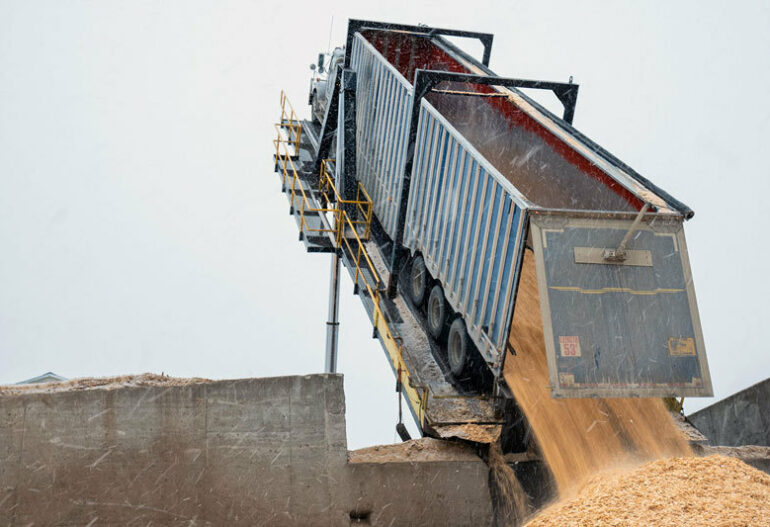